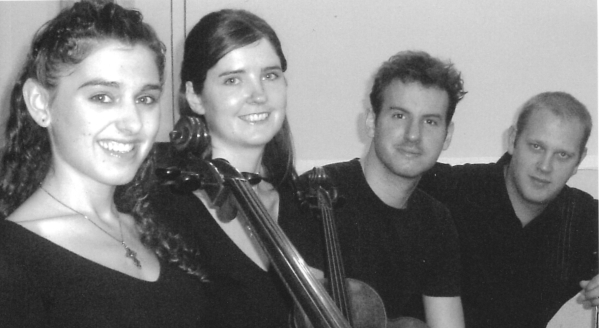 Tours abroad have taken them to Greece, Germany, Italy and Belgium, where they were invited to perform and work as assistants on the Junior European String Teachers Association Course in Brussels. For the last three years they have been artists in residence at the Beaumont Festival in France and they recently studied with Paul Katz of the Cleveland Quartet in Paris as part of the ProQuartet young professional training programme. They were selected for the Countess of Munster Recital Scheme in 2002 and they have also collaborated with the Henri Oguike Dance Company in performances of Shostakovitch's Ninth String Quartet.

Matthew Denton graduated from the Royal College of Music where he studied with Felix Andrievsky. He won The Kathleen Long Chamber Music Prize at the Royal College for two consecutive years and in 2000 he returned as a Junior Fellow in Chamber Music. He has won many prizes for his chamber music performances, including the Parkhouse Award and the Royal Overseas League Prize and combines playing chamber music with recital and concerto work. He is well known for his performances with the Eimer Piano Trio and is In much demand as a teacher.

Michelle Fleming studied at Cork School of Music In Ireland, where she was awarded the Pro Muslca Trophy [1999-2001] for the most outstanding student in the Department of Strings. With generous support from the Arts Council of Ireland, Michelle continued her studies at the Royal Northern College of Music, Manchester, where she studied with Wen Zhou Li. Michelle has been the leader of the National Youth Orchestra of Ireland and a member of the European Union Youth Orchestra. She has worked with Camerata Ireland, Manchester Camerata and performs frequently as a soloist.

Graham Broadbent is also a prize-winning chamber musician. As a founder member of the Newbold Piano Quartet he performed on recital schemes sponsored by The Tunnell Trust and the Tillet Trust Young Artists Platform, including recitals at the Wigmore Hall and Purcell Room. Graham graduated from the Royal College of Music, where he was awarded the Bernard Shore Viola Prize (in memory of Lionel Tertis), the Margo Stebbing Viola Prize and the Ernest Tomlinson Viola Prize for outstanding performance.

Emma Denton studied at the Royal Academy of Music with David Strange, where she received many of the Academy's top awards including the Louise Child Prize for the highest overall degree, the David Martin/Florence Hooten Concerto prize and the Max Pirani and Harry Isaacs chamber music prizes. She was the winner of the Croydon Symphony Orchestra Soloist Award 2002 and the 2001 Muriel Taylor Scholarship for cellists. Emma plays on a Gllkes cello with generous financial assistance from The Countess of Munster Musical Trust.

Nicola Eimer has recently graduated from the Juilliard School, where she was studying with Joseph Kalichstein on the Master's programme. She has made her concerto debuts at the Barbican and Wigmore Hall, and has also given several solo recitals at venues including Steinway Hall, the Garrick Club and St. James' Piccadilly. Nicola has also performed in solo and chamber music concerts abroad, including those in Italy, Austria and the United States.

Nicola began her undergraduate studies in London at the Royal Academy of Music, where she had a scholarship to study with Christopher Elton. She has received generous support from the Countess of Munster Musical Trust, and has also been awarded a Fulbright Scholarship.