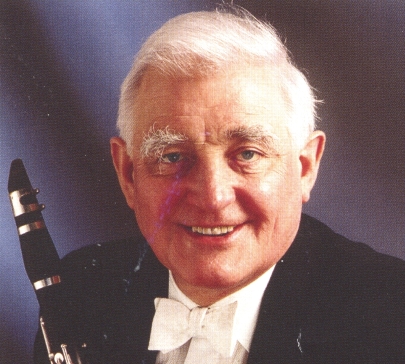 Following his debut at the age of 18 as soloist in the Mozart Clarinet Concerto at the Edinburgh Festival with the National Youth Orchestra, Colin Bradbury studied at the Royal College of Music. He then completed National Service with the Irish Guards Band, played for Sadlers Wells Opera and then for thirty years was Principal Clarinet of the BBC Symphony Orchestra, working with conductors from Boult to Boulez! His many solo performances with the orchestra included the concertos of Debussy, Mozart, Weber and Nielson at Henry Wood Promenade concerts. His association with pianist Oliver Davies led to the performance of unfamiliar works, leading to the expansion of the clarinet repertoire.

They have made five CDs, the latest of which, The Obligatto Clarinet, was released this year. He has recorded the two Brahms Sonatas together with the Hindemith with pianist Bernhard Roberts. The BBC magazine said of this recording: "These are excellent readings and as impressive as any I have heard". In 1997, Colin Bradbury founded Lazarus Edition to meet the demand by clarinettists worldwide for printed versions of freshly discovered material.

Oliver Davies studied at the Royal College of Music, where he is now a Professor of piano. There he founded the Department of Portraits and Performance History. His performing career has covered a wide range of styles from recitals and recordings on early keyboards to modern British premiers.A particular interest in placing music in a historical context has led to a long series of surveys of the musical histories of great British Houses.

Members have priority for tickets until 1st January 2005