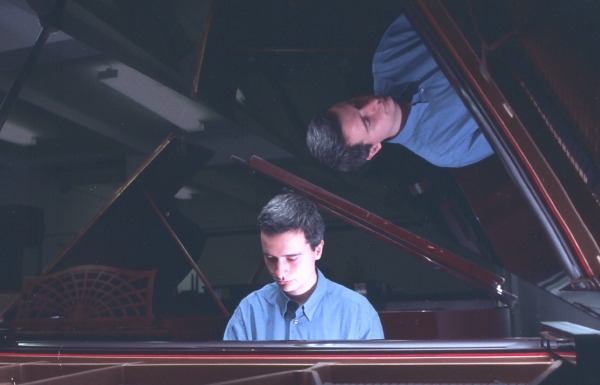 Marcus Andrews was born in 1977 and began piano lessons in Sussex with Yvonne Dinwiddy aged 6. In 1990 he began his studies at Trinity College of Music with Simon Young and has since studied at the University of Connecticut with Neal Larrabee. While studying for his Master's degree at the University of Connecticut he was Graduate Assistant Accompanist, was awarded the Evelyn Bonar Storrs scholarship and was made a member of the National Music Honors Society Pi Kappa Lambda. He was also awarded a grant from South East Music Schemes (UK) for study in the USA. In June 2001 he studied intensively with John O'Conor at the Beethoven Course in Positano, Italy, run by the Fondazione Culturale Wilhelm Kempff and he has several times been a bursary student at Dartington International Summer School.

Winner of the Trinity College of Music Trust Silver Medal for Keyboard and the first Jaques Samuel Pianos Trinity College of Music Prize, he has a varied career as both a soloist and a chamber musician. He has appeared with flautist Matilda Tullberg in the Park Lane Group Young Artists Series at the Purcell Room, giving what the Times described as an "heroic" account of Boulez's Sonatine and alongside actors Ed Stoppard and Gemma Jones in an English Chamber Theatre production for the Bermuda Festival and Jermyn Street Theatre. He made his Cheltenham Festival debut with Soprano Olga Wells in summer 2003. More recent engagements have included a series of three solo recitals at Blackheath Halls, recitals at St. Martin in the Fields, CODA (Tunbridge Wells) and a performance of Mozart's 'Jeunehomme' Concerto K. 271 in Germany. Marcus has given recitals in Atlanta and Hartford in the USA and in Italy.

Winner of the 2000 TWIYCA Accompanist Prize and the Harold Clarke Prize, Marcus works with a number of different singers and instrumentalists and is a member of the Karrilon Trio, which was formed to explore and develop the repertoire for Flute, Oboe and Piano. In addition to his concert work, Marcus is an accompanist for Trinity College of Music and the London Orpheus Choir and Professor of Piano at Blackheath Conservatoire.